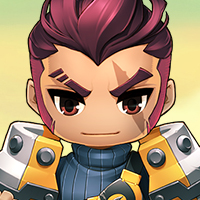 4. Timing: The Promotion begins at the time it is announced on the Sponsor’s dedicated web post for the Promotion (the “Post”) on Sponsor’s MapleStory 2 forum page at (http://forums.maplestory2.nexon.net/discussion/45847) (“Promotion Page”) on September 26, 2019, and ends on October 9th, 2019 at 11:59:59 pm Pacific Time (the “Promotion Period”). Submissions that are submitted before or after the Promotion Period will be disqualified. Sponsor’s computer will be the official timekeeping device for this Promotion. Entrants are responsible for calculating the difference in time zones.

5. How to Participate: To participate in the Promotion, entrant must submit one (1) screenshot of their character (friends optional) and their favorite memory from the last year of playing MapleStory 2, along with the entrant’s IGN and server name.

The submission must:
a. Include the items specified in Section 5.
b. Not contain material that violates or infringes another’s rights, including but not limited to privacy, publicity or intellectual property rights, or that constitutes copyright or trademark infringement;
c. Not in any way disparage Sponsor, any of its products or services, the Promotion, or any person or party affiliated with the Promotion, or alternatively appear to promote any direct competitor of Sponsor;
d. Not contain text or imagery that is inappropriate, indecent, obscene hateful, tortious, defamatory, slanderous or libelous (as determined by Sponsor in its sole discretion);
e. Not include threats (expressed or implied) to any person, place, business, or group;
f. Not violate the privacy rights or any other rights of any person, business, or group;
g. Not name or depict any real life third party without his/her permission;
h. Not contain text or imagery that promotes bigotry, racism, hatred or harm against any group or individual or promotes discrimination based on race, gender, religion, nationality, disability, sexual orientation or age; and
i. Not contain material that is unlawful, in violation of or contrary to the laws or regulations in any jurisdiction where the image is created.

7. Intellectual Property: By submitting the image as part of this Promotion, each entrant acknowledges and agrees to the following:
a. Entrant irrevocably grants to the Sponsor, its agents, licensees, and assigns the unconditional and perpetual (non-exclusive) right and permission to copyright, reproduce, encode, store, copy, transmit, publish, post, broadcast, display, publicly perform, adapt, modify, create derivative works of, exhibit, and otherwise use the image or any part thereof as-is or edited (with or without using any entrant’s name) in any media throughout the world for any purpose, without limitation, and without additional review, compensation, or approval from any entrant or any other party.
b. Entrant forever waives any rights of copyrights, trademark rights, privacy rights and any other legal or moral rights that may preclude the Sponsor’s use of the image, or require any entrant’s permission for the Sponsor to use the image.
c. Entrant agrees not to instigate, support, maintain, or authorize any action, claim or lawsuit against the Sponsor on the grounds that use of the image, or any derivative works thereof, infringes any rights that any entrant or third party may have as creator (or co-creator) of the image including, without limitation, copyrights, trademark rights and moral rights.
d. Entrant irrevocably grants to Sponsor, its agents, licensees and assigns an unconditional, worldwide, royalty-free and perpetual (non-exclusive) right and permission to use the entrant’s

name, image, voice and other likenesses that are included in the image or which are shared with Sponsor as part of entrant’s participation in the Promotion, in any media now known or later invented for any commercial purpose, including without limitation advertising or marketing of Sponsor’s products and services, without further compensation or the right to approve such uses.

8. Winner Selection: After the Promotion Period has ended, Sponsor will select a qualified judge or panel of qualified judges to judge all eligible submissions in accordance with the following criteria:
a. Screenshot – 40%
b. Story Sentiment – 60%

Once confirmed, the prize package to be awarded to each grand prize winner in connection with the Promotion will be:
· 1111 Red Merets
· One (1) Rustic Mushcabin Name Tag

Once confirmed, the prize to be awarded to each runner-up prize winner in connection with the Promotion will be:
· 1111 Red Merets

10. Warranties and Representations: By submitting an entry or otherwise participating in the Promotion, each entrant warrants and represents that: (a) the submission is original to the entrant, (b) the submission does not

15. Winners List: The Sponsor will publish the identity of the winners on Sponsor’s Forum Page (http://forums.maplestory2.nexon.net/discussion/45847) no later than thirty (30) days after all winners have been confirmed. © 2017-2019 Nexon America Inc. All rights reserved.
Log In Sign Up