My name is Michele.

Now, we first need to access the Enchanting system. You can find it in the Inventory screen, on the button Enchant Items: 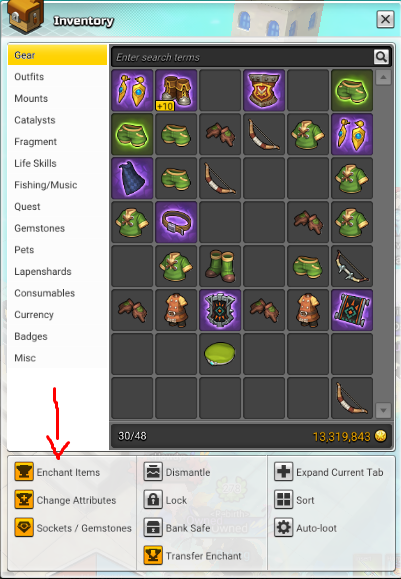 Once you click on it, this following menu will appear. 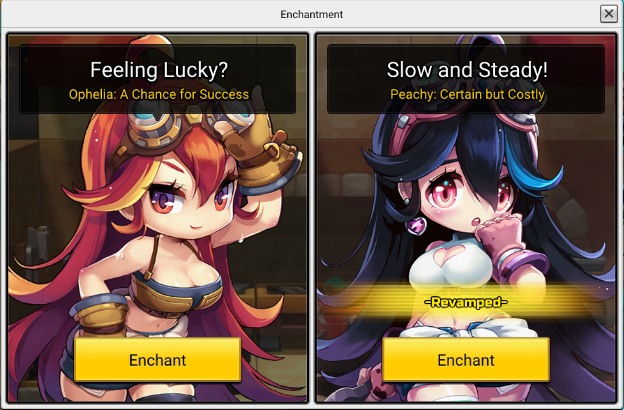 There are two options that you have, to enchant your items; Ophelia, which is based on your luck, so you should choose that option if you feel lucky, and Peachy, who will give you an guaranteed successful enchantment at the cost of using more materials, and is more based on the enchantment progress.

Alternatively, should you opt for an more traditional way of going forth and back to enchant your items, Ophelia can be found at Nerman Forge and Peachy at Minar. 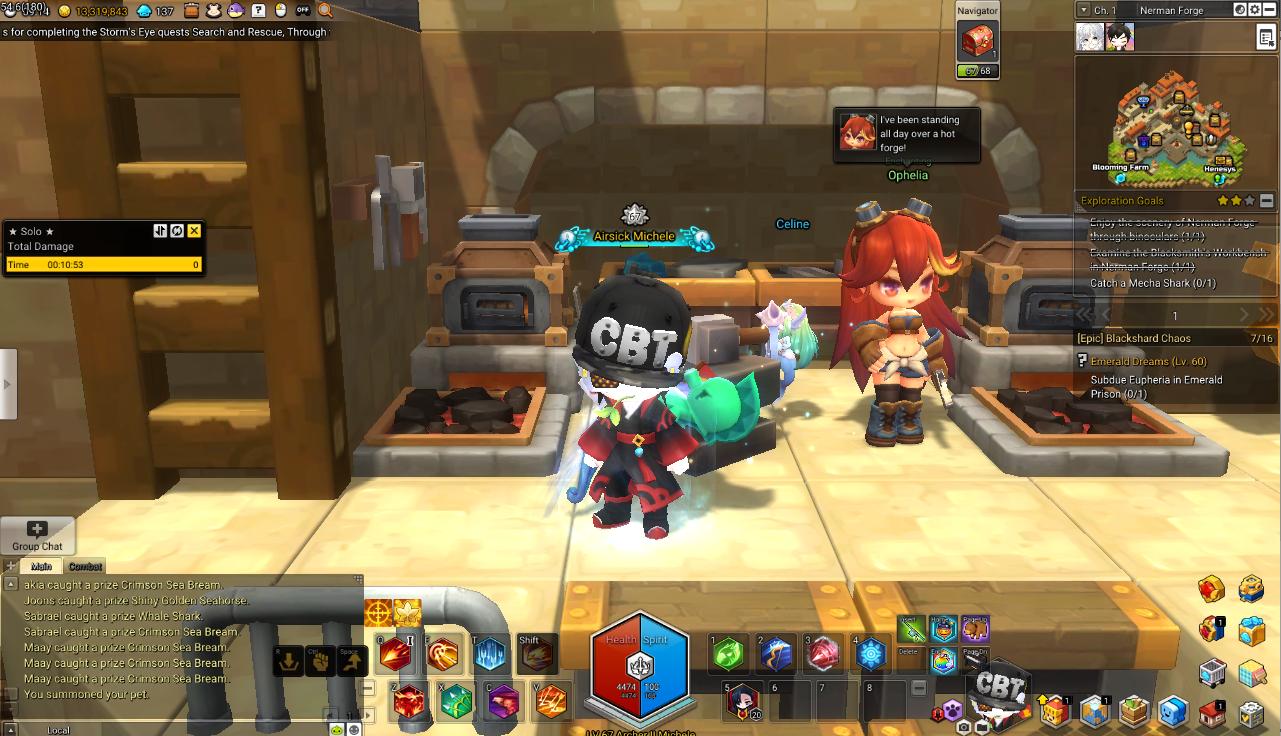 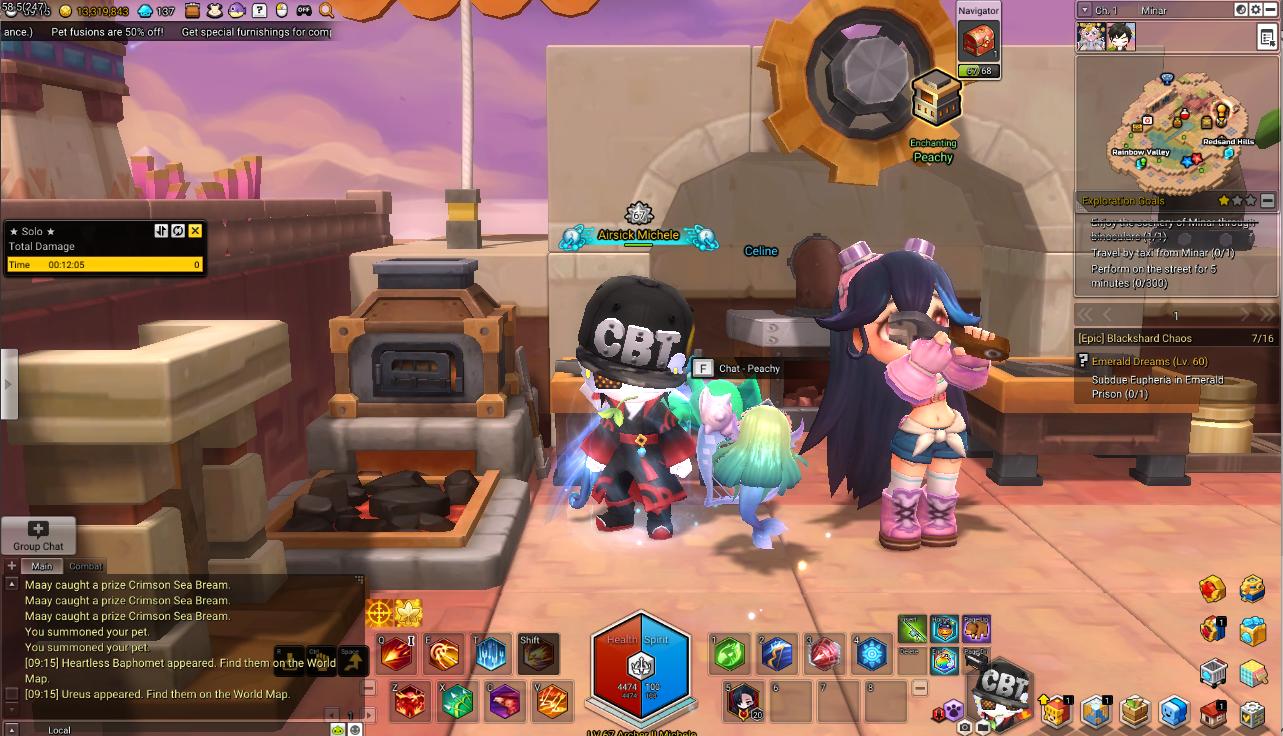 With that being said, let's move on to Ophelia. 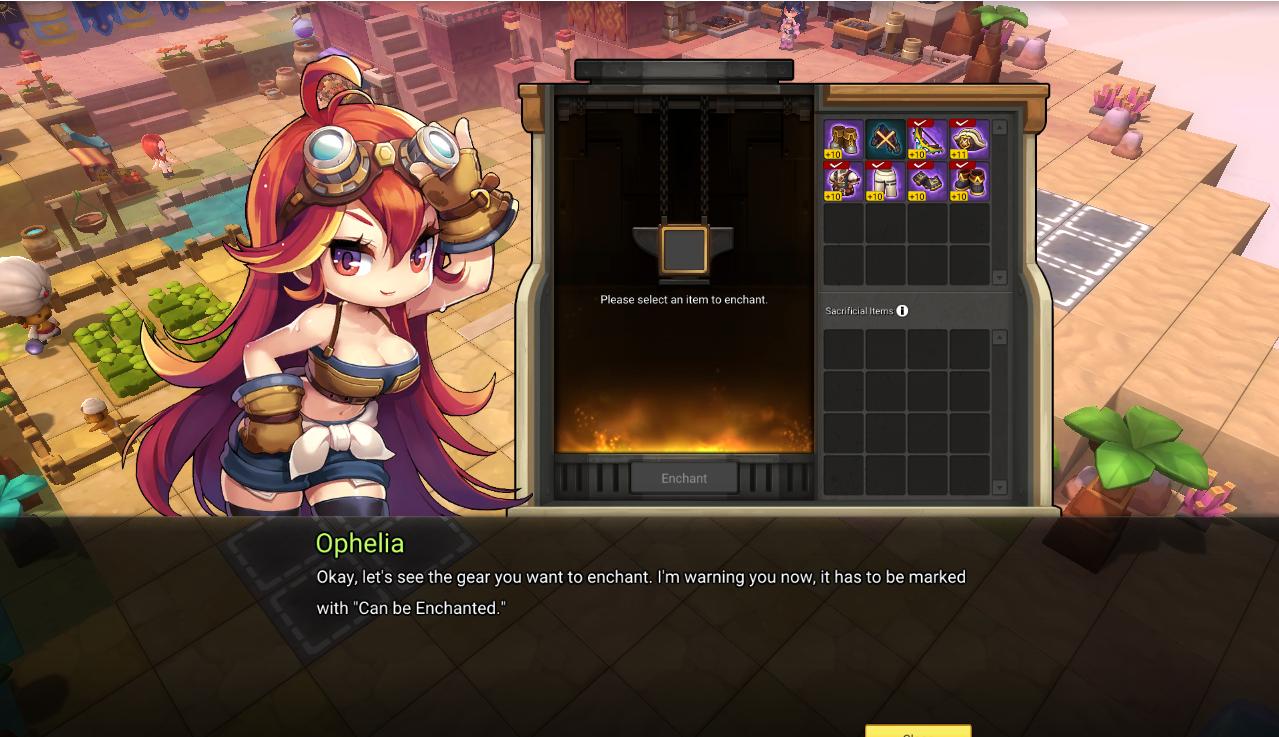 As you can see, this is Ophelia, that girl that will give you an chance of enchanting. Here, in the top right, you can see that I have +10 Epic Gear. It is important to remember that, as I will explain a little later. Anyways, I've took the liberty of buying an Rare Gloves from Black Market. Yes, I know that it is not for my class, but do not worry, by the time I post this, I will have already dismantled that equip. Let's move on... 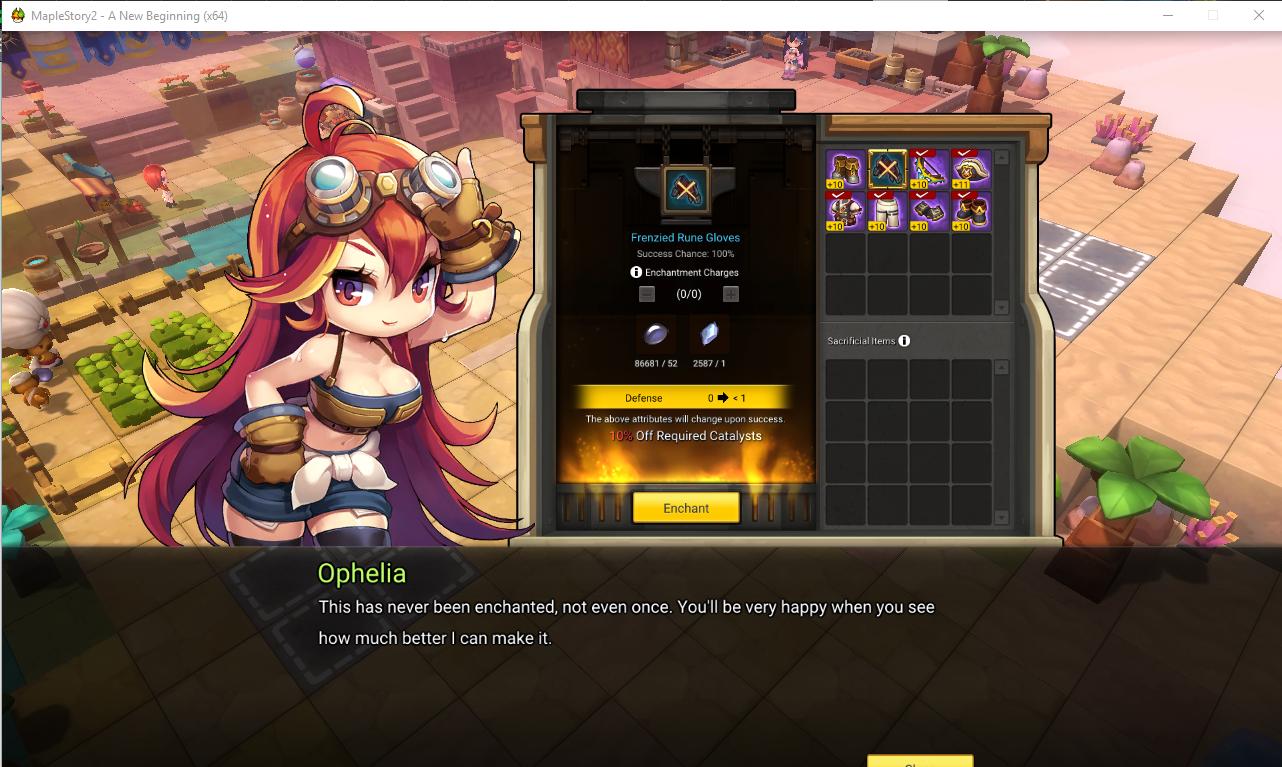 Here, you can see that I've clicked on that gloves. There are several things to note;

- Success Chance. This is the probability that your Enchantment will succeed while starting the process. Note that for later.
- Enchantment Charges. If you fail to enchant your equip, you will gain Enchantment Charges, depending on the enchantment level. Failing to enchant before +10 will always give you 1 charge, but from +10 to 11, you will gain 2, 3, then 4 from +12 to +13 to +14, and finally 5 from +14 to +15. The player can choose to use those charges to increase the chance of an successful enchantment, up to 100% chance of success, as evidenced by the buttons - and + between the number of charges.
- Item. You will need materials for the enchantment. In this case, we need two items for enchantment; Onyx Crystal, an very common item that can be usually found by dismantling gear. You can also get it from World Boss, from Dungeons and from Prestige Ranks. They are the most common ways to get these quickly and reliably.
The second item is Crystal Fragment, which is easy to get but may be expensive; you can gain them from a shop that sells them at 1000. One of the easiest way to get Crystal Fragments is through Sky Fortress Tokens, which you may get from the missions; each Faction sells 500, for a total of 2500 each week. Pretty a lot, no?
- Attributes. You may preview the enchantment attributes and the change upon success. In this case, the enchantment gives <1 Defense, but that's because I'm using that example equip. Epic gears will certainly give you more defense than that.
- 10% Off Required Catalysts. Premium comes into factor; it will reduce the amount needed for enchantment. Thus, this is important, as later enchantment levels can save you a lot of Onyxs and more materials. 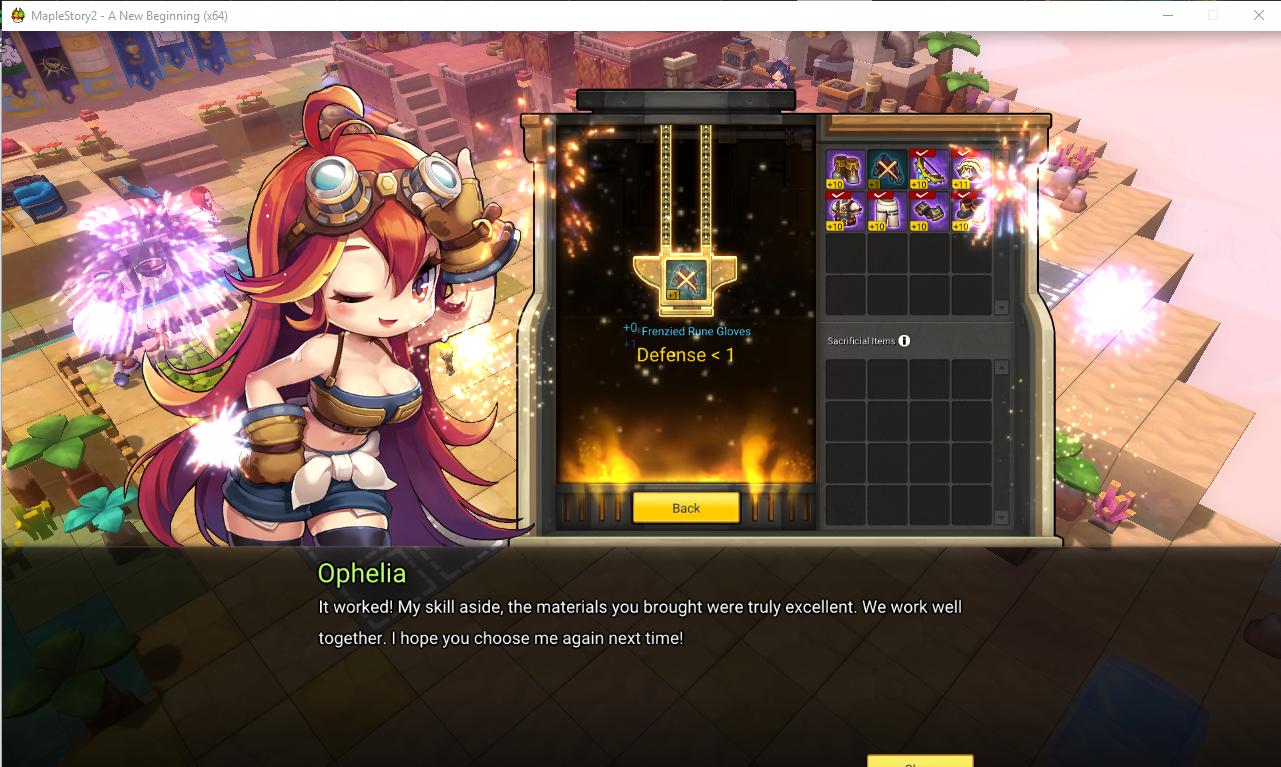 Notice how there is an +1 sign on the gloves now? It indicates the enchantment level. You can also see the stat bonus. Let's go enchanting further, two more times... 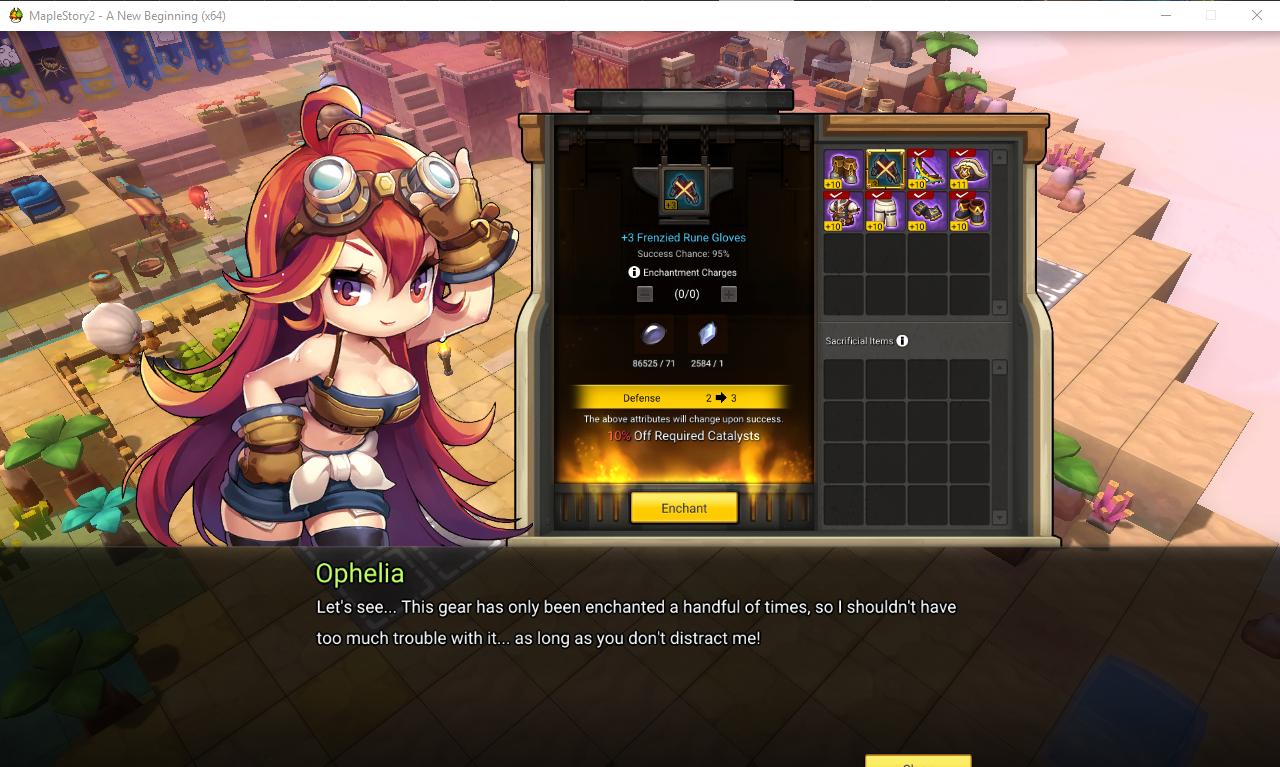 Now then. Notice how the Success Chance, which is below the gear shown in the center, has decreased from 100% to 95%? From +3 onward, with Ophelia there is an chance that your enchantment may fail. I will try several times to see if it will fail one time... 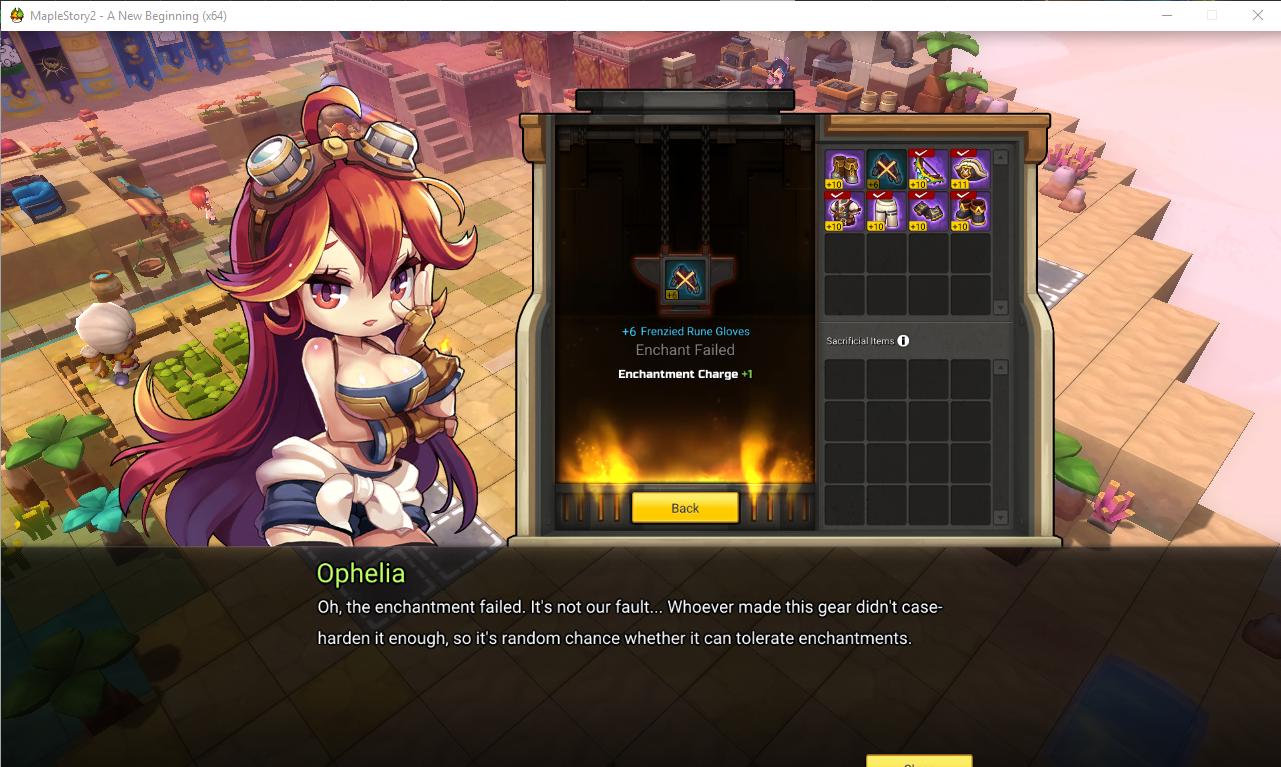 You may see that I failed to enchant my gloves at +6, and you can notice that I got 1 charge from the failed enchantment. Now, let's use the charge... 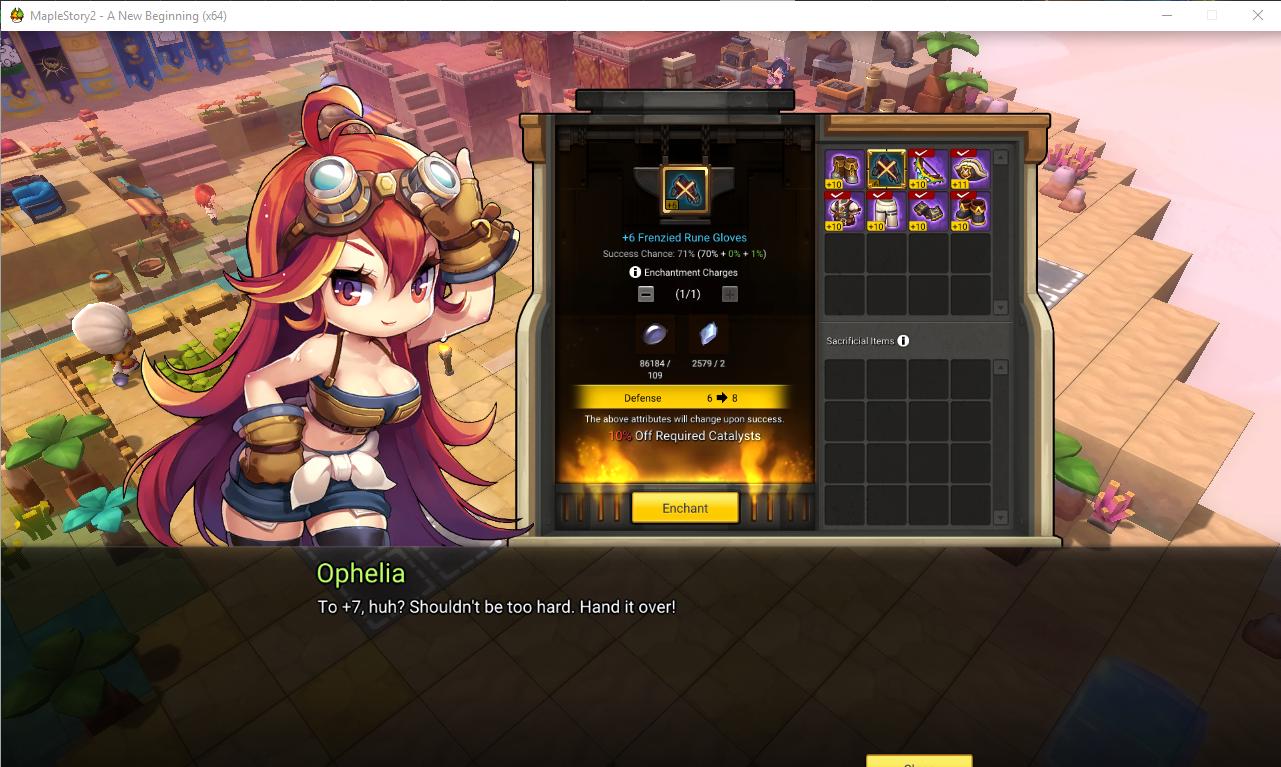 Notice how the chance went up from 70% to 71%? I'm using one charge, however, you can also see that there is also an additional green number. The white number indicates the base chance of success, while the green one indicates the increased chance. The 1% is from the charge. However, the 0% is an different story, which I will explain later. Now then, let's try again... 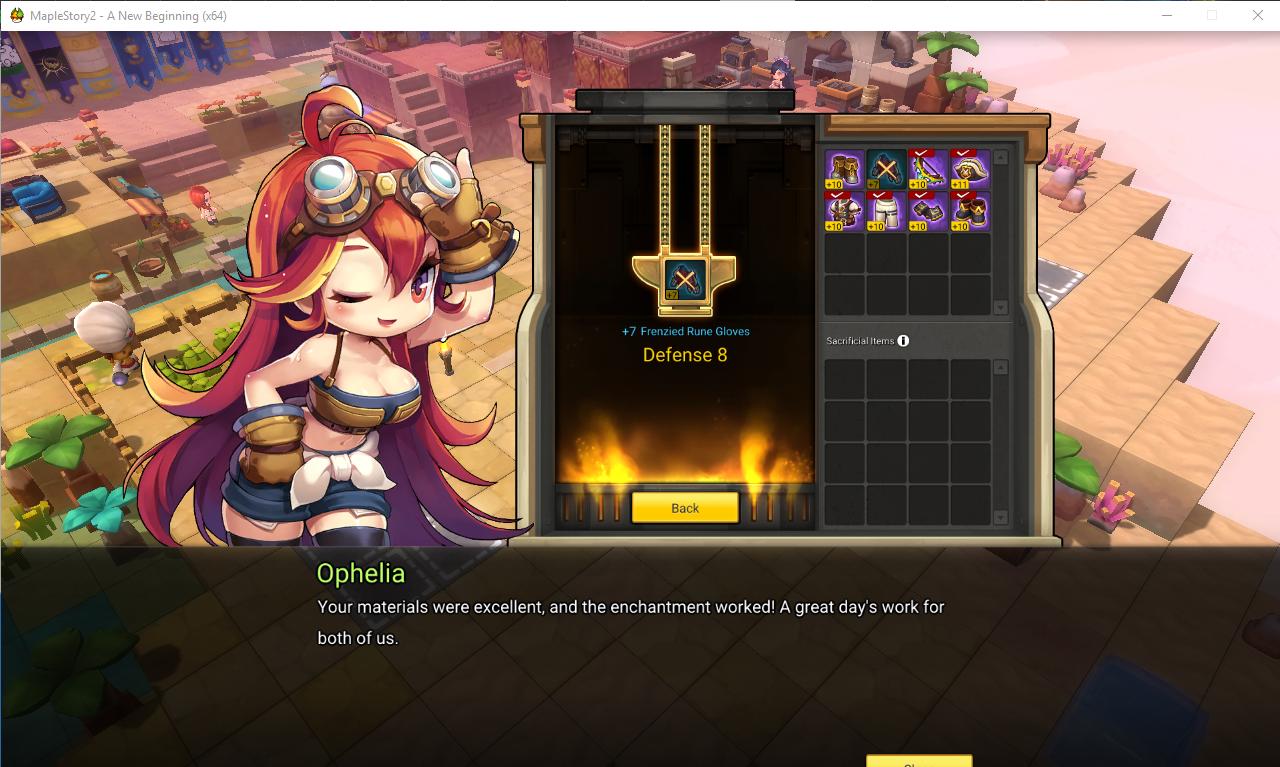 With that teensy little bit charge, I've enchanted my gloves to +7! Let me try again, because there is an important thing to note... 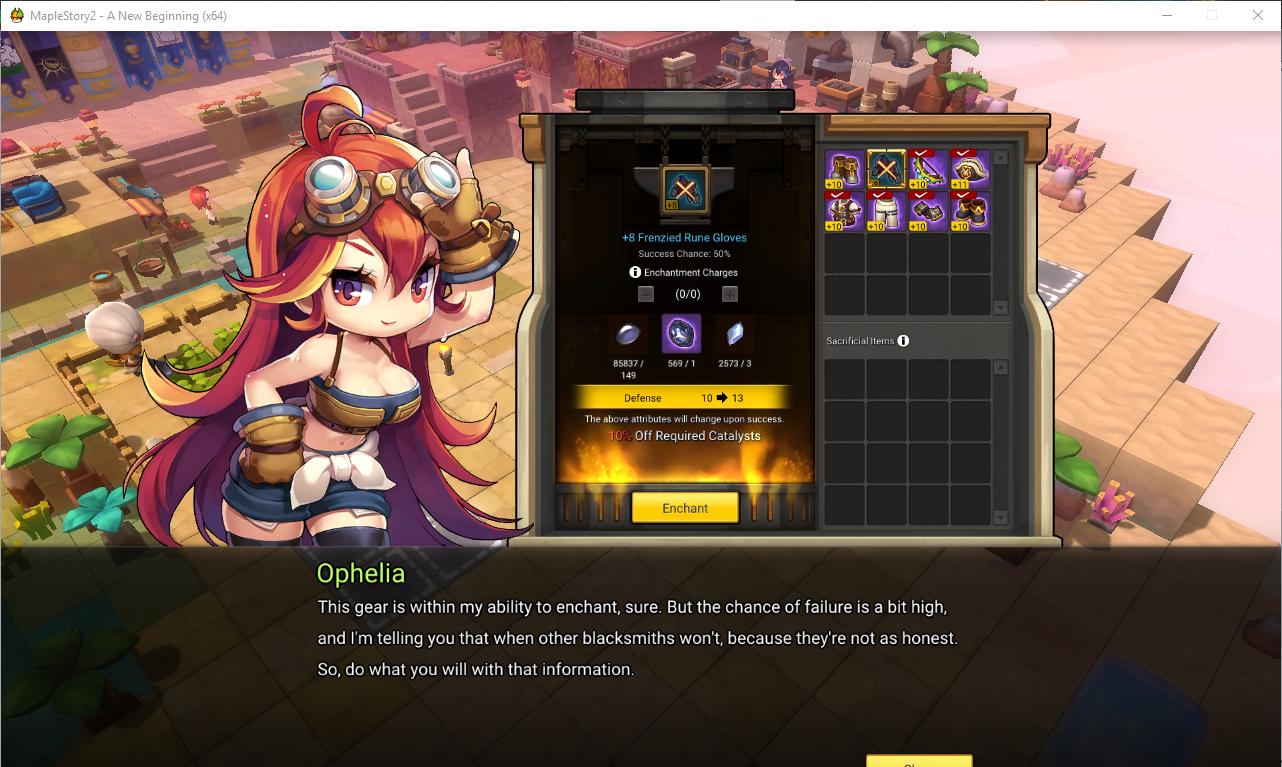 Alongside the obvious success rate, you must've noticed that the gloves requires an additional material... the Chaos Onyx! It is still easily got from about the same sources, however it is a bit hard to save up enough of them for enchantment. As for Dismantling, you may get Chaos Onyx if you dismantle Epic equips, as known as those with four stars that you can see when you hover over the equipment... 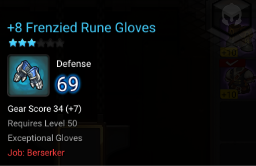 It has three stars. Epic Equips has four stars, actually.

That enchantment at +8's comparision with Ophelia and Peachy becomes more apparent after the rewamp. It sounds quite easier to Peachy +8 to +9, since it does not require any Chaos Onyx at all... 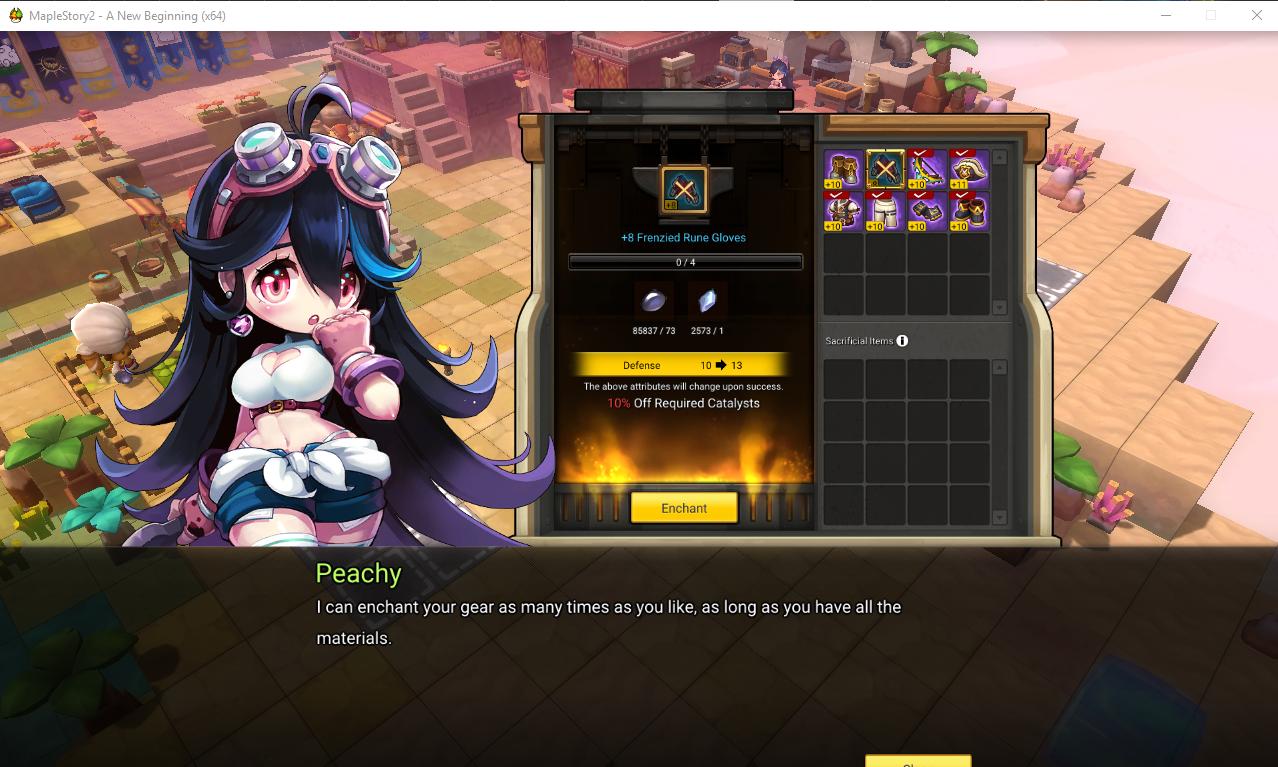 However, this system can be told at a later time. For now, let's go back to Ophelia... 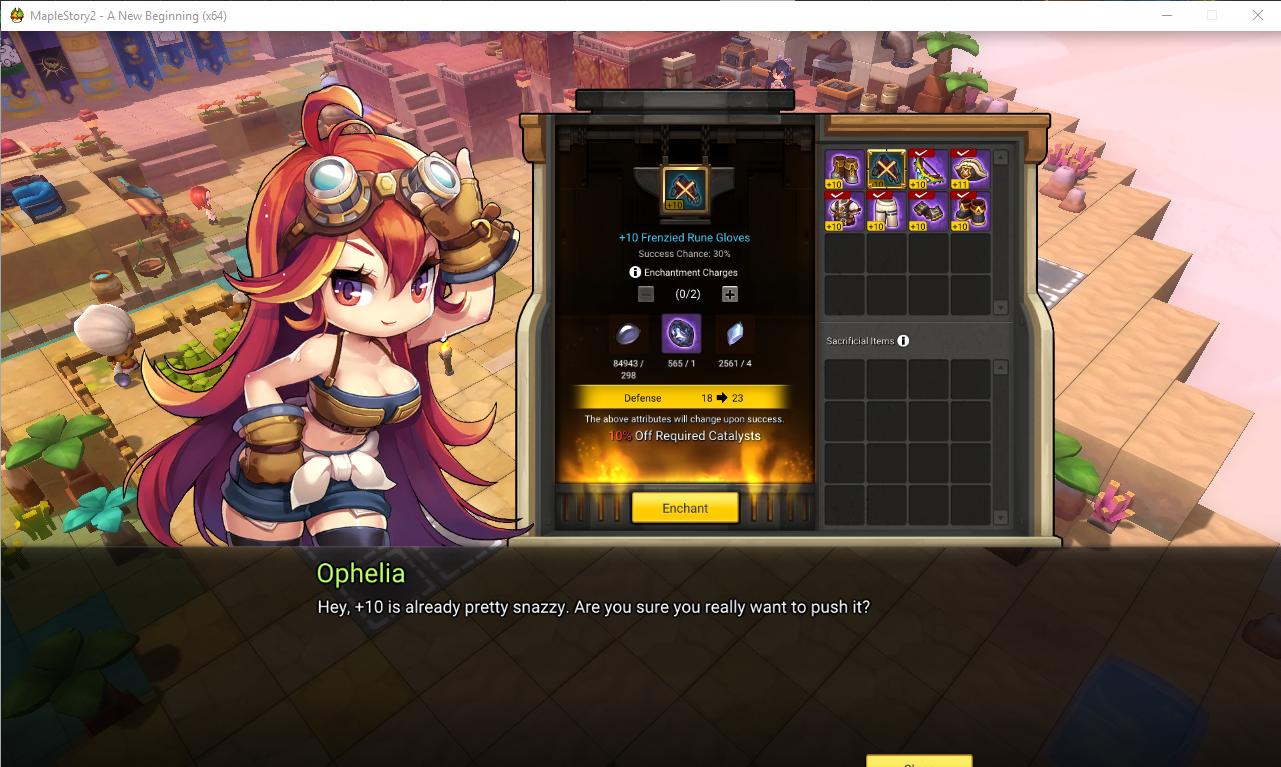 +10 is the snazzy time! It is the ideal enchantment level for going into harder Dungeons, although the Gear Score may different depending on the dungeon. The +10 will be the important turning point, as I will explain to you now. Do you remember how there was an additional 0% while using an Charge to enchant?

Yeah, let's go back to viewing one of my equipment for Enchantment... 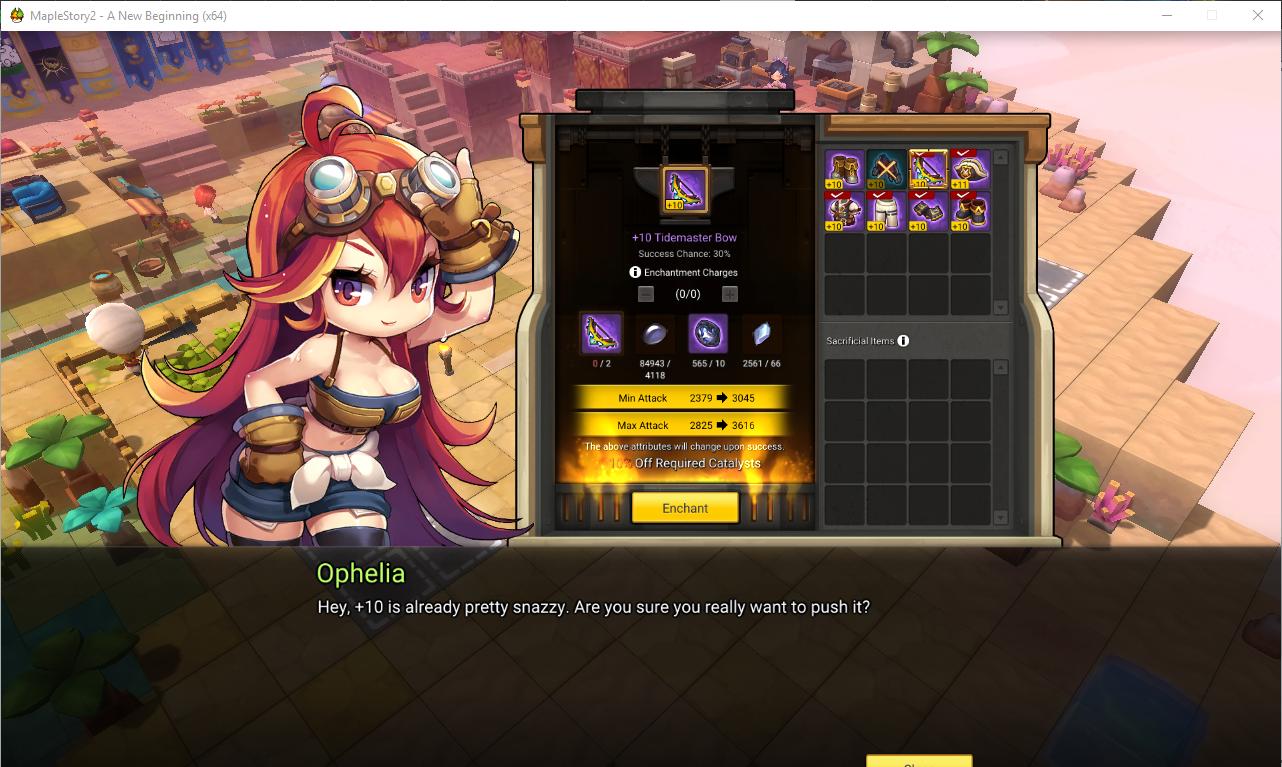 There are these materials... wait, something's new in there! Do you now see that there is the same equip while trying to enchant +10, listed in the Materials part? In order to enchant your Epic or better equips beyond +10, you will have to gain the same equips from the dungeon as the equip being enchanted here, and then sacrifice it. In this case, I'd need 2 weapons for the enchantment- avaliable sacrifical equips will be displayed at the left bottom, but I do not have any. However, if you stack more sacrifical item than the required amount, you can increase the enchantment chance, up to 30%. Stack that with charges, and it is possible to enchant your item with some ease, as long as you're patient or lucky.

You do not have to enchant the items for sacrifice. However, regardless of when you fail or successfully enchant your item, the sacrifical item will disappear. Please be careful, especially if one of the sacrifical items has an good roll like Pierce! Locked items cannot be sacrificed, and neither is equipped items; how would you be able to sacrifice your own equips?

Also, there is one thing to note. When you start enchanting Epic Items, you will ALWAYS need Chaos Onyx, regardless of if it was +0 or not.

The table below lists the Success Chance, the increase per additional Copy if needed, and the Charges upon failure with Ophelia...

I think this is about it, for enchanting with Ophelia. Let's move on to Peachy next... 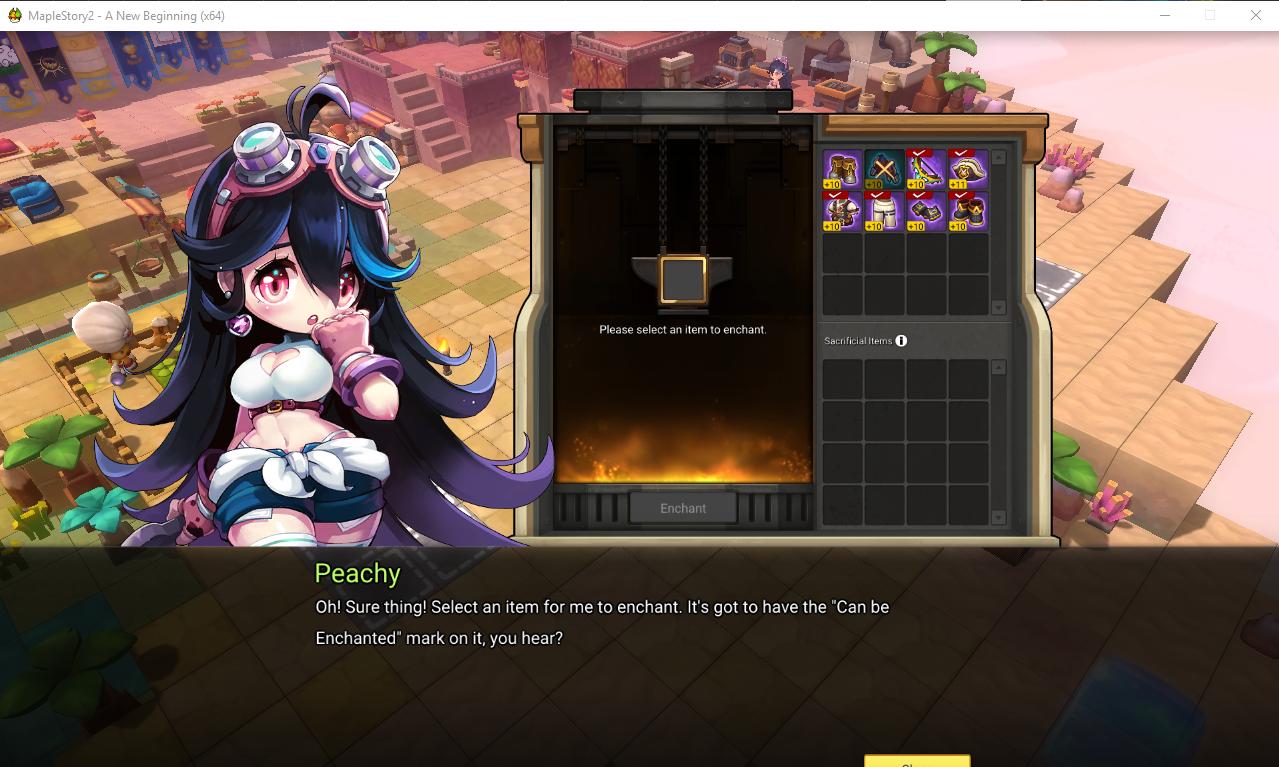 Peachy's system is vastly different from Ophelia, in that it guarantees an successful enchantment, but it will cost you more materials. After Peachy's rewamp, it is now more easier to use her, and she is an better viable alternative, possibly at par with Ophelia. There is always an number of enchantment sessions that is required in order to successfully enchant an level of an equipment.

Before the rewamp however, Peachy was MUCH COSTY than Ophelia. Like, really... before the rewamp, I remember you needing 100, or HUNDRED SESSIONS in order to even complete an enchantment from +14 to +15. Wow. Anyways!

I'm going to be using the same gear, the gloves... 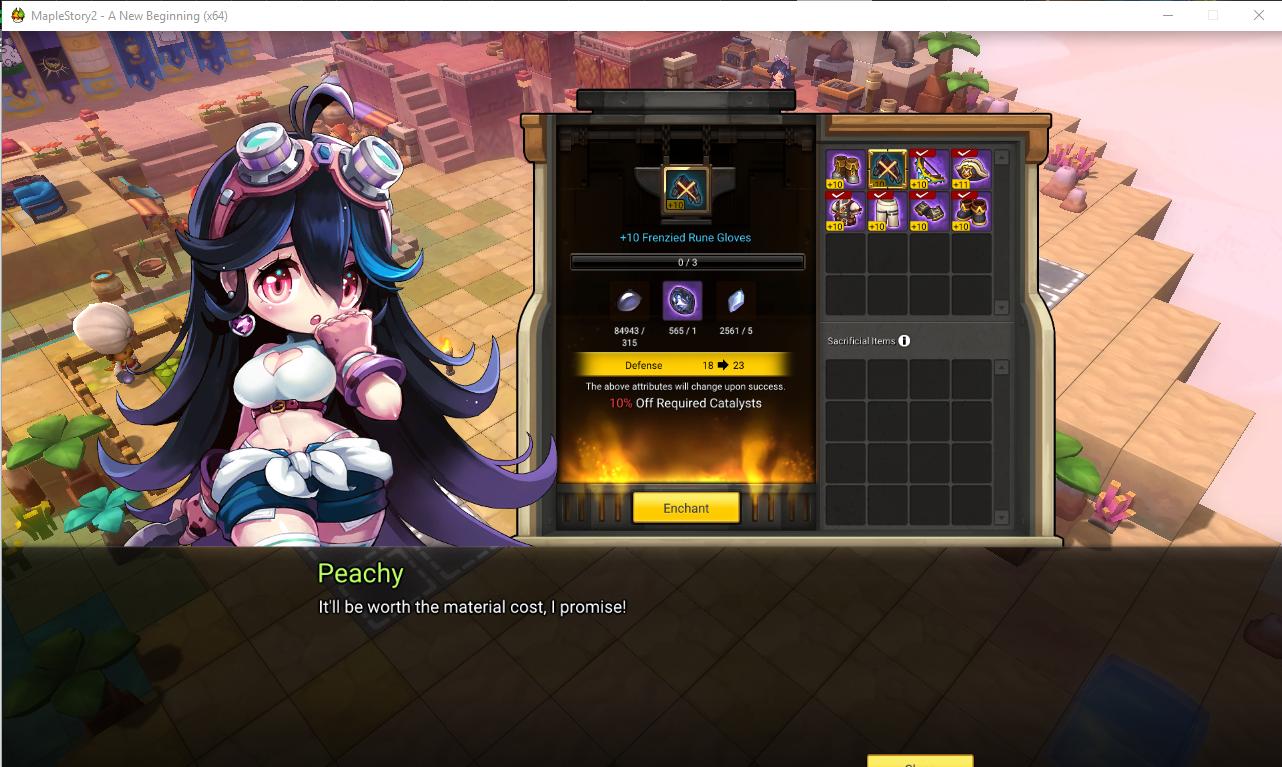 You can clearly see the progress bar, 0/3. It means that you need to enchant 3 times in order to enchant my gloves to +11. At +10, it will use Chaos Onyx... However, I noticed that, at +8, while Ophelia does uses Chaos Onyx, Peachy's method does not require any at all. I wonder if it is the same with +9 as well. Anyways, resuming...

After the rewamp, there is also an 10% discount for Premium members when you use Peachy. That's really generous! Before, there was even none of that at all. Now then, let me click on that button.... 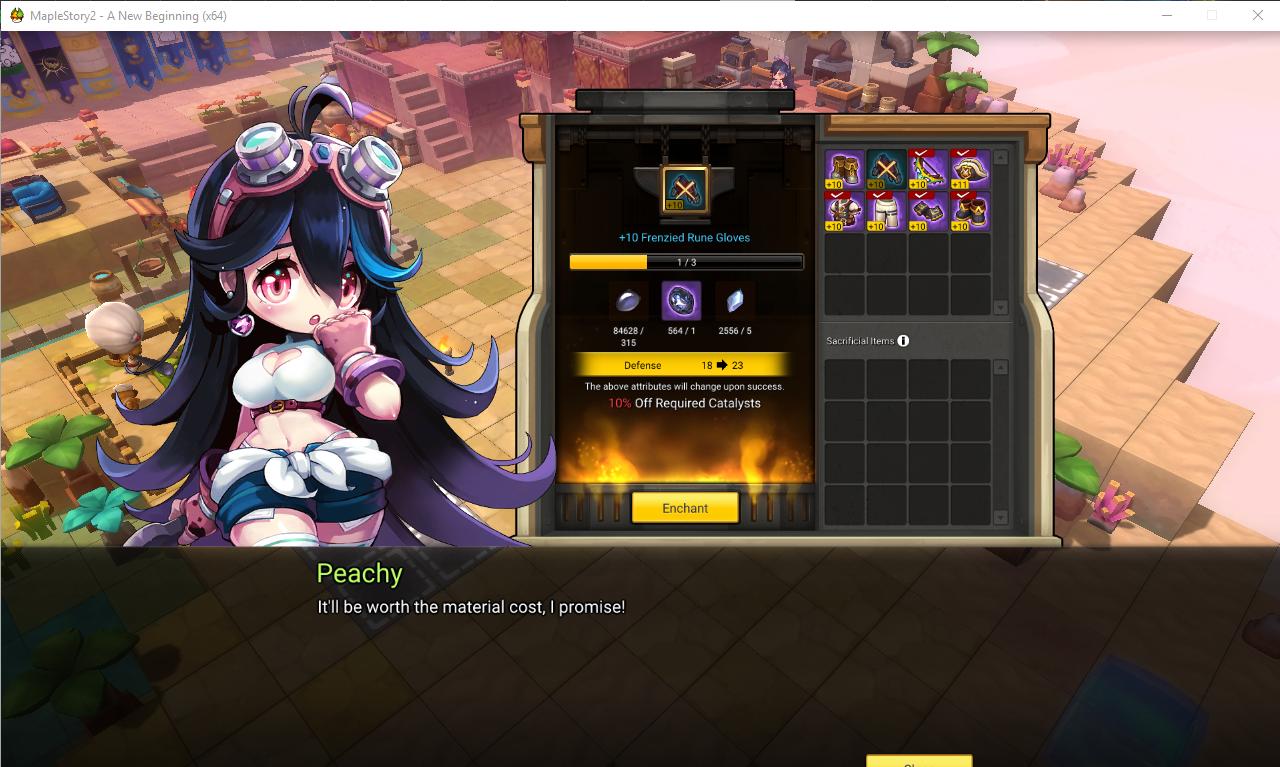 Notice the bar? It has gone up from 0, to 1, out of 3. As it stands, you will need an certain amount of sessions. I can do this two more times, and then... 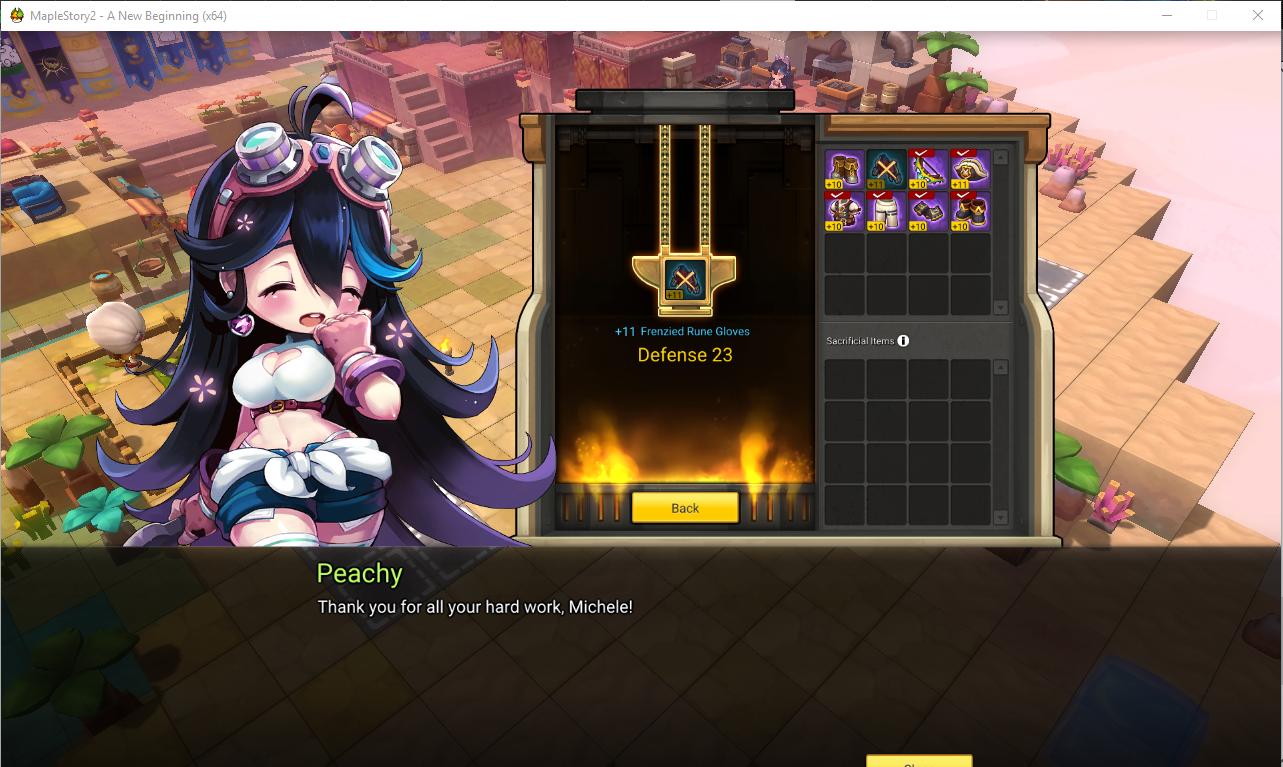 Again, the rules of +10 Epic and above applies in an similar way as Ophelia: at +10, you will need sacrifical items to enchant your items. One difference is that the sacrificed item disappears upon use or enchantment, instead of whenever it fails or not, so the progress is kept. Maybe it will use more materials, but the end results is that the average material costs for enchantment is about the same, if not a bit lower than Ophelia's.

And one extra thing...

It took me a while to find it, but this is from Project New Leaf. Here is an table of the original costs of Peachy's enchantment costs for enchanting an Legendary Weapon...

This is the rewamped Table...

Now do you see the insane costs of Peachy's enchantment from +0 to +15?! Especially that +14 to +15! It's really insane to have you be spending a lot of insane Onyx and Chaos Onyx for enchantment! It would cost you billions of Mesos to even enchant it using exclusively her! I am glad that the rewamp happened.

Anyways, that about covers it for the Enchantment system. Go get your Equips enchanted, Maplers! Here is an example of an maxed enchantment, +15 gloves; 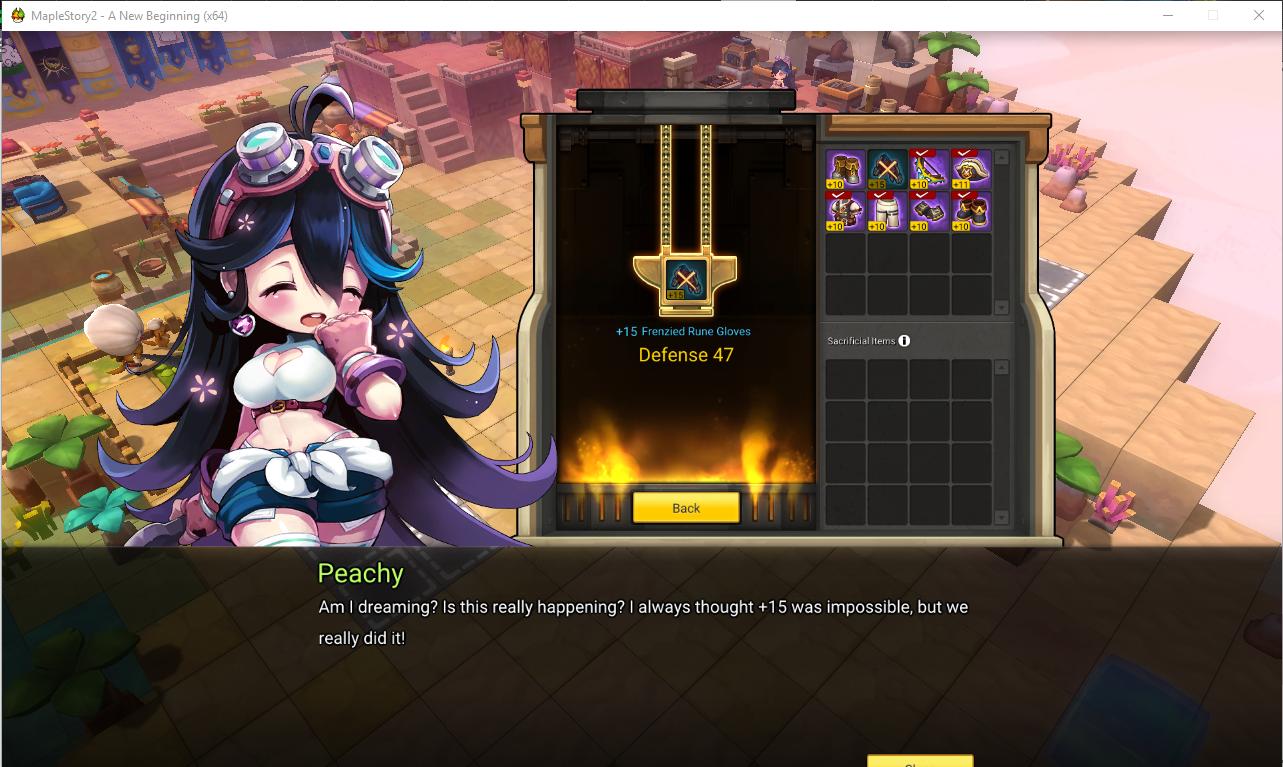 There were different consequences, depending on the version. In one of the earliest English Guide for enchantment, if you failed the enchantment, you would lose an level of enchantment, and you would be locked out of enchanting it for a while, unill you used Merets. However at the same time, you could select which attribute to enchant your Equipment with. So for example, critical damage, or more. You could still equip it, though, even if it had a cooldown. The second version removed the cooldown, though.

However, the +10 and above was infamous for raging peoples as there were an wall of red text, and always an confirmation before the actual process. That was because if you failed the enchantment, the item would break, meaning that not only would you lose ALL of the enchantment level, but you were EVEN unable to equip the broken item. Of course, there were items that could restore broken equips, but for non p2w peoples, that was like being screwed over in this game.

I couldn't find any good images about these systems, so I might be wrong about any of these since it was not too much known, however there are some videos that explains the original enchantment system. Of course, with the equip breaking, it would mean that Peachy was an viable alternative even if it was costly.

The Restart Update of end 2016 removed that system from +6 to +10 about losing chances, as well as changing the system for above +10; if it broke, you wouldn't be able to enchant it anymore, but the level was still kept, and you could still equip it. Of course, the June 2018 producer blog changed the system to what we know it is now. Yay.